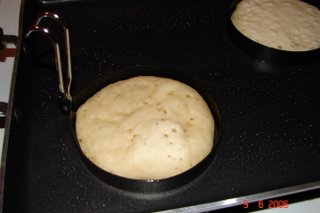 I promised an in-depth discussion about my crumpet-making experiences when I wrote about the housewarming, so here it is.

First of all, let me say that, even though they look like pancakes and look like they'd be simple, crumpets are actually not, at all! You have to let the batter rise twice; once after you add yeast, the second time with the addition of baking soda. And there's a technique to cooking them, too.

I had to substitute active dry yeast for instant yeast, since that's all I had. After the second rising, the batter is supposed to be dotted with air-bubbles. I only had a couple, but I decided to forge ahead as it was getting late. I followed the recipe in The Bread Bible exactly. As the recipes there are usually very exact, and produce good results (that's where I got my scone recipe), I thought I'd be okay.

But I ran into problems and, never having eaten or made crumpets before, I had to think on my feet. The batter was really thick, and didn't want to spread out into the crumpet ring once I'd poured it onto the griddle. And there weren't any holes forming on top. The little holes, from air bubbles, are essential. Without them, they looked more like English muffins (but Andrea, who'd had crumpets before, said they definitely tasted like crumpets)!

Well, I figured the reason the bubbles weren't forming was tied into the reason why the batter wasn't spreading. It was just too thick. With more water, and a thinner batter, the bubbles didn't have to work as hard to expand through the batter. So I kept adding water until I was happy with the consistency. I ended up with a pancake batter-like consistency in the end, liquid enough to spread when poured, but still thick enough not to run out from the edges of the crumpet ring. 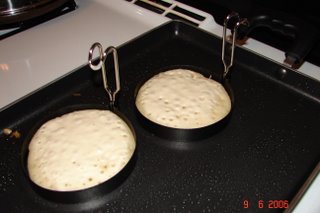 Watching my crumpets cook, I learned some other things. Heat is key. You have to cook crumpets really slowly. The recipe says to cook them for 10 minutes on one side, and I thought it must be a mistake, but it's not. You have to have the heat set low enough that you can cook the crumpet through to the top side from the bottom, without burning the bottom.

Why cook through to the top, you ask? The slow cooking, and the heat, brings the air bubbles to the top surface, producing the characteristic holes in the top of the crumpet. You have to cook until the batter at the top is pretty much set so that, when you flip the crumpet over to lightly brown the other side, you won't end up "erasing" the holes. So, low heat, cook through to the top, and flip over. Thank God for non-stick! At least I didn't have to worry about heavily buttering the griddle or the rings; they slipped right out! The double griddle was definitely a good investmnet!

You can keep the crumpets overnight in a paper bag (which I did for the housewarming) and toast them to heat them back up before serving. Then you can serve with butter, honey, jams, or preserves, or all of the above.