It was sunny, then rainy, by turns this past Saturday. I got up early in the morning because the weather forecast had been for blazing heat, and I wanted to work in the garden before it became swelteringly hot. I managed to break up and loosen the soil in my plot, and prune the rose bushes, before the rain really started coming down.

Then I retreated into the house to plant the seeds I'd planned to start indoors. These included four kinds of basil, parsley, dill, oregano, sage, chives, cilantro, and marigold and heartsease for fun.

I went to a local garden centre and bought some Jiffy peat pellets just for that purpose. This being my first major seed-starting enterprise (I did plant a couple of things in Japan), I decided to make things a little easier on myself. 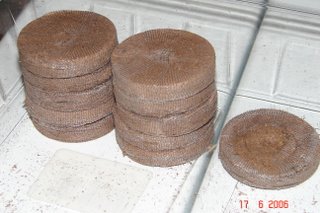 The Jiffy pellets are easy. They come dried in little discs, and you soak them in water until they've expanded, complete with a little dimple on top where you plant the seeds. I put two or three seeds (depending on the size of the seed; oregano seeds are so small they're almost dust, whereas coriander seeds are a relatively big) into eat dimple. Then you cover the seeds (if the packet says to cover them; some seeds need light to germinate) with a tiny bit of potting soil or seedling mix. 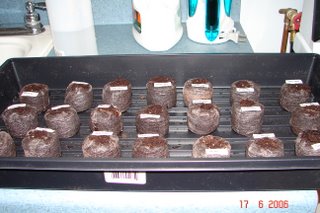 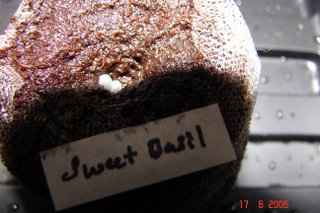 The basil seeds were pretty amazing! They started out small and black, with a hard, shiny coating. After I dropped them into the damp peat pellets, they started reacting within minutes!! They developed an almost fuzzy, translucent, white coating that you can see in the picture.

After planting indoors, the rain had stopped and so I went outdoors and direct-seeded some chamomile, calendula, borage and nasturtiums. That was Saturday, and I had all my seeds planted for the moment. Yeah, it's kind of late to start seeds, but I ordered mine online, and they didn't arrive until after the housewarming. 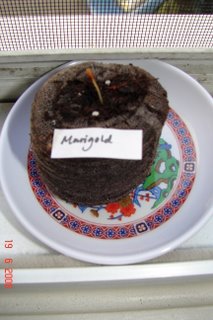 Then this morning, before work, I went to see if any of my seeds had germinated. Once they do, you need to give them good light. I wasn't really expecting to see anything, but lo and behold! A germinating winner! 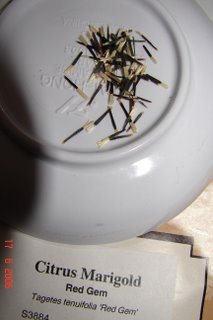 The marigold, which had had such pretty - but insubstantial-looking - seeds, had sent up a shoot! I think that's pretty amazing.

And today, after work, I noticed one of my Sweet basils, and a Siam Queen, had germinated, too!

Ugh, I want a garden! I love the idea of this new category, even though I can't really participate. But I can dream! I look forward to pictures of your flourishing garden later in the summer. No pressure. ;)