I know, I know. What an arrogant post title! But really, I think I deserve it. And I was so relieved when everything went fairly smoothly.

So, what goes into planning and hosting a housewarming teaparty for ten people? Well, as you know, I started pondering and trying to set the menu about 2 weeks beforehand. I agonized over whether or not I had enough teacups - even mismatched ones - when it seemed as though it was going to be a party for sixteen.

Then, the weekend and Monday and Tuesday before, I tested out some recipes. I tried a honey castella cake recipe taken from a Japanese book but, due to lack of an accurate scale (all Japanese recipes list ingredients mainly in grams) and electric mixer, it didn't turn out well. I also tried out the scone recipe from The Bread Bible, sans currants, which I did end up using.

I had work every day, of course, but here's what I did from Wednesday evening to Saturday, when the actual housewarming was.

Wednesday: Stop by Walmart to pick up last of household items. Plan out quantities of ingredients, baking, cooking and cleaning schedule. Erin lends us her electric mixer, thank God!!! 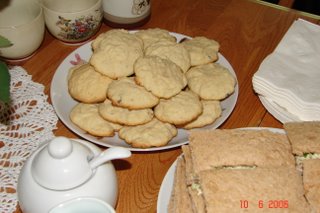 Friday: Pick up hardware for Andrea to hang pictures. Drop by the supermarket to pick up salad ingredients. Bake madeleines. Kitchen cleanup. Help Andrea decide where to hang her pictures, and hang them. Make and eat dinner. Cook lunch for next day. Kitchen cleanup. Make batter for crumpets and allow to rise twice. Meanwhile, start making tarragon chicken salad. Clean and tidy pantry, closet and laundry room. Do laundry and bedding. Cook crumpets - crumpets are more difficult than they look. (Another post devoted to that in coming days, so stay tuned to learn all I learnt about crumpets!) Finish making tarragon chicken salad. Kitchen cleanup. Scrub down bathroom, except for floors. 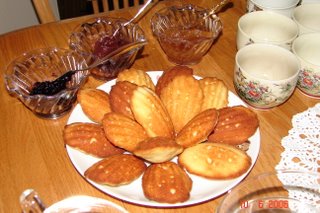 Forty-minutes until guests arrive: Put food out onto plates. Set table. Andrea puts sandwiches together. Preheat oven to toast crumpets. Run down to garden to cut some roses for the table. 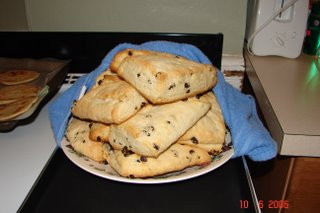 Flaky scones. I forgot to take pictures of the finished crumpets, but there they are on the left.

Guests arrive: I've always heard that it's considered polite to arrive slightly late, never early, to your host/hostess' place, because they probably have last-minute preparations to make, and you don't want to catch them when they're still running around like headless chickens. Our guests arrived ten, twenty, thirty, and eighty minutes late. A nightmare. In fact, pretty rude considering one of them was watching the World Cup, and another was at a dog show. If I was going to arrive eighty minutes late to a small gathering where everyone would be waiting for me before food or water could pass their lips, I would have made my excuses and not have come. But that's just me. 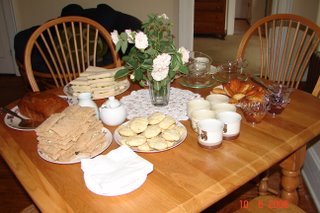 Apart from that, and the fact that the water couldn't boil quickly enough to suit me, everything went pretty well once everyone had arrived. Conversation and tea flowed more or less non-stop. People mingled and met, and the air was heady with the perfume of butter and roses. People mingled and met, and there was more than enough to eat (something I worried abuot when I thought we were having fifteen or sixteen people coming). In fact, as one guest put it, we were eating for two hours! People even took food home in doggie bags and asked for recipes, which I will take as a compliment.

It was crazy, it was hectic. But it was a job well done. I got to try lots of new recipes, and miraculously they all turned out well; even the crumpets, which - at around 11:30 p.m. on Friday night - I had considered not serving. It's served the purpose of forcing Andrea and me to finish the last of our unpacking, and we're now officially settled in. Yes, I can heave a great sigh of relief and satisfaction, and sleep most of the day away on Sunday, which I did.

Wow, you throw a mean party. Look at all that food! Boyfriend and I just ordered pizza for our lame excuse of a housewarming. Pizza, chips, and an Eddie Izzard video. And the mynah pooped in Boyfriend's co-worker's hair. At least we bought cushions for people to sit on!

Who's Eddie Izzard? And who cares if it was pizza, as long as everyone enjoyed themselves!

Eddie Izzard is a British comedian. Really funny. We had something like 10 or 12 people over, and cooking for that many people just wasn't feasible in the amount of time we had. We ordered like 8 pizzas. There were 3 left over at the end. I was eating pizza for a couple of days after that.

Here's a virtual pat on the back for a job well done. *pats Lana on back* I really wish I could've been there to enjoy your food, or even help you clean up. It seems like you lived in your kitchen whenever you weren't at work!

I haven't had a housewarming yet, but I think I'm combining it with a July 4th gathering. Like you, I'll be using that day as motivation to UNPACK!!!

Everything looks scrumptious, by the way. ;)

If I had an oven I'd ask for the recipes! I was thinking of buying a small toaster oven with an adjustible temperature setting, but I'm running out of space to put one in my kitchen. Hmm. Maybe for my birthday.

I have a Japanese cookbook with lots of recipes for sweets that don't require an oven, because many (actually, most) Japanese households don't have ovens. I'll translate some recipes for you soon.