Crumpet Rings; Where Art Thou? 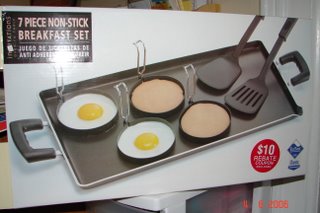 It's not easy, finding crumpet rings. I thought I'd be able to go the cheap option by cutting out the top and bottom of some tuna fish-sized tins (as suggested in The Bread Bible), but have you taken a look - a real look - at tins these days?

When I was little, the tops and bottoms of canned food tins were the same, with the raised ring on the outside and a flat, smooth circular area in the middle. Of course, they didn't stack very securely; pulling one off the shelves was likely to have the whole display coming down.

Well, I'm happy and sad to report that packaging designers finally did something about that. Food tins now have a rounded, convex bottom that fits neatly into the space of another tin's top, allowing them to stack more securely. However, can openers can't deal with the bottom of the tin. I couldn't cut off the bottoms of several slightly different "models" that I bought.

So, back to the problem of finding something to use as crumpet rings. I've been around to the Walmart, K-Mart, Target, Bed Bath & Beyond and Linens N' Things, as well as several supermarkets in the area. Nobody's selling plain, round cookie cutter rings anymore!! What's with that?

I was beginning to despair, until I saw this double griddle set at Bed Bath and Beyond, for $20 with a $10 rebate, complete with four whatever-you-want-to-call-them rings. I've hummed and I've hawed; I don't really need/deserve a griddle. Andrea has a small, circular, cast-iron griddle and I was only looking to buy four little crumpet rings! Then there's the whole health issue with non-stick surfaces these days. But (looking on Ebay), buying a set of crumpet rings would cost more than ten dollars anyway. And I could use this to make pancakes and french toast and stuff. We don't have any non-stick pans in the apartment.........

So, what do you think? Should I forget serving crumpets for my housewarming tea party and return the double griddle? Or should I keep it? I need to decide in the next two or three days. Help!

Forgive me, I don't know what a crumpet is! Sounds like one of those Excrutiatingly British things... Scones were a total mystery to me until I was in year 8 and we made some in home economics (I decided they were ick). Still never seen a crumpet.

I'm not sure the scones we made in Home Ec are the standard to judge all scones by! I've had some really good ones.

And yeah, crumpets are excrutiatingly British! But they're supposed to be the epitome of a teatime treat! I'll let you know how they taste.

Neetu told me she'll be at your housewarming! I wish I could be with you all. Neetu and I weren't able to get together while she was in California. :(