I had some yarn left over from knitting Blue Skies, so I decided last night to look through my knitting patterns and magazines to see if the Dale of Norway Stork yarn could be used for any other projects I've been wanting to knit. 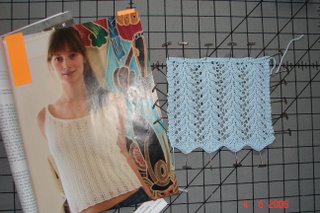 But the actual pattern gauge is 29 stitches to 4-inches in the lace vine pattern you see in the picture. Anyway, I figured it was worth trying out and, what do you know, the gauge is pretty darn close after blocking! It might require some minor tweaking of lengths and stuff, but nothing too major. I think I'll knit it in white, just like in the picture, because I don't have any nice, white tank tops. Or navy blue with white trim might be nice, too.

I'll probably order the yarn online from here. It can be intimidating at first, and troublesome, but I usually end up substituting and using a different yarn from what's used in a pattern. Sometimes it an issue of cost, sometimes it's because I don't like the colours available. Sometimes it's difficult getting your hands on the recommended yarn! I've still to go hunting out yarn shops in the area, but I've already done my computer research and made a list. That will be for after the housewarming.

Is that cotton yarn you're using there? Because a knit wool tank top just sounds a bit odd to me. It's probably not as gross and sweaty in upstate New York though.