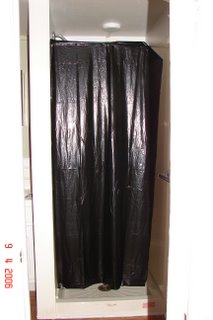 I've been moving this weekend, and what a task it has been!! Moocow and I took the Washington Deluxe bus from NYC to D.C., picked up our 10' U-haul in Arlington, VA, proceeded to the storage facility in Fairfax, VA (where some, but not all, of my stuff was) and loaded my boxes into the truck. Caught a movie and stayed the night at Moocow's boyfriend's place.

Neither Moocow nor I had ever driven a minivan before, never mind a small truck. But needs must, and we drove it - through the rain - back to NYC. Of course, you can't park trucks out on the street at night in NYC, so we had to borrow my aunt's driveway.

The next day, we got the rest of my stuff from storage in Queens and then, with my dad and brother in the truck and me driving the family car, we headed up to Albany.

Luckily, most of my stuff was packed up from Cornell. I had lots of small, but relatively light, boxes because I had to move a lot of it myself, so unloading the truck wasn't a big deal. I shot a picture of my emergency shower curtain before I took it down to replace it with a real one. Last time I came up, I made it out of a garbage bag, tape and some pennies.

It took the three of us almost all day on Monday to find a captain's bed and a twin mattress to fit my budget. We ended up getting the bed, with a bookshelf headboard, from Walmart. That thing weighed a tonne and was around 7-feet long, and Walmart wouldn't deliver!!! Well, we managed to get it, and ourselves, into our Honda Civic and up the stairs to the apartment. *gasp wheeze*

Now, the challenge is figuring out how to arrange the furniture Andrea and I have, and where to put all my belongings after they come out of the boxes!! I think I'm going to have to hold a garage sale! I thought I didn't have much of a yarn/fabric stash, but that's because it was in divided up amongst two storage facilities and home. Now that it's all in one place.......!

No time to knit and use up some of it, though! I have to find a job, and soon!