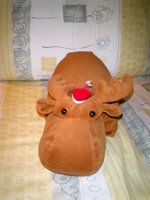 Several years ago, my brother bought a couple of stuffed moose. (Mooses? Meese? I prefer "meese".) Well I think it's supposed to be a reindeer, but I like to think of it as a moose.

The moose body is a pillow folded in half and held together by velcro. I thought it was quite clever, really. The corners of the pillow even seem to be making little legs.

So I decided to copy it. It seemed simple enough - you make the head and then sew it onto a big rectangle. I looked at the way the pieces were put together, and drew up a version on newspaper.

I cut the pieces out of the newspaper and taped them together to make sure the seam lengths matched and they fit together right. Then I carefully snipped the tape and then used the newspaper pieces as my pattern templates. It worked all right for the most part. Except I made the piece that formed the back of his neck too wide, the result being that he has a couple of darts (er, gathers?) at the back of his head for it to fit onto the body properly. Plus, I would have preferred him to have a shorter, wider snout. 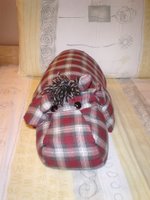 As it is, he looks like a hippocow. I intended him to be a cow*, but he looks more hippo-like. Except hippos don't have horns, do they? Oh well, he's still cute. I had some leftover black yarn from my Blue Backpack of Doom so I gave him a moptop. He also has a tassel tail. I actually had to sew the hairs onto his head two at a time! (There's gotta be a better way to do this.)

There's another picture him opened out flat below. I really have no idea where to get toy stuffing in Hong Kong, so I ended up buying a cheap pillow and cannibalizing it. Problem was, the pillow turned out to be mostly foam with a thin layer of stuffing wrapped around it. The stuffing looks almost like the stuff people use to line fish tank filters! It was that cheap. So hippocow's body is stuffed with four side-by-side strips of foam partly disguised in a stuffing sandwich. He's a bit lumpy. Man, am I a hack or am I a hack? 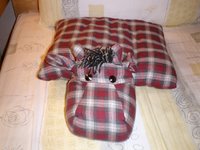 * This is my second cow. The first I made during Christmas for Boyfriend. His nickname is Ngau Ngau because I can't pronounce his last name (Nguyen). I started calling him Ngau Yuen instead, and the cow thing stuck.

Cost Plus used to sell dog versions of that pillow. Very cute!