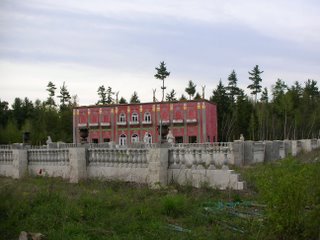 I would have had this post up much sooner if I hadn't misplaced the CD-ROM with the photos on it. We stopped by to see this place after our hike around Kingston, NY, a couple of weeks ago.

My roommate Andrea's friend Tara's boyfriend, Jake, is a state trooper. He was called out to this man's house (still under construction) because his front gates had been spray-painted in an act of - dare I say it? - understandable vandalism.

This gentleman, a stockbroker from NYC, bought a nice piece of land in upstate New York and proceeded to build his dream home: Versailles. Yes, that's what this is supposed to be, replete with a statue garden (behind the gates, on the right) and a bower-garden (on the left). But the statues resemble unwary passers-by, permanently petrified by the horror of it all, and the numerous metal arches scattered willy-nilly in the vineless, leafless garden is forlorn and ill-planned. I've been to Versailles, and it ain't pink. 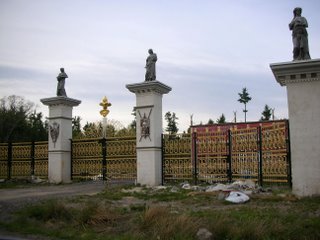 And notice there, on the red-faced fascade? Numerous arches that should have been windows, but for some reason just aren't. And it's been decades, perhaps over a century, since we've had window taxes on homes! Those balconies, from windows and blind windows alike, are already falling down.

The pillars of the surrounding stone fence, without a properly set foundation, tilt and sag. Now they're held up by rudely constructed concrete blocks. Yea, rudely constructed by the happy owner himself. When questioned, it seems he's going for the settled-in and aged look. 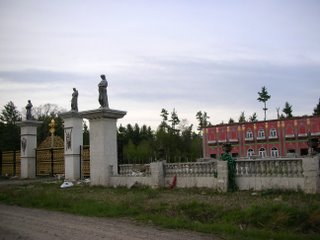 To better file his report, Jake was given a tour of the innards of the house as well. On the ground floor, to the right of the main section, will be an indoor swimming pool. (Moowcow and I both envisage the Neptune Pool in Hearst's Castle.)

To the left, there will be a huge ballroom for the owner and his wife, complete with a throne room!! The pertinent question is, is his wife okay with all of this?! Unfortunately, Jake didn't have the pleasure of making her acquaintance.

If you want to be ostentatious, by all means, go all out. But how dare you try to be ostentatious and half-assed at the same time? The problem is, this house seems to be that man's "baby", and he's been working at a lot of it himself. For example, he mixed the pure gold powder into the paint with which he painted the front gates, by himself. Of course, he then proceeded to leave unused packets of gold dust lying around, to which his unhappy contractors - whom he can't seem to keep because he never pays them - feel free to help themselves.

And, of course, the neighbours detest him. He's single-handedly driving down property values in the area because, seriously, who wants to look across at that every day? Not only that, but he's inconsiderate with construction waste as well. He claims it's going to be a 2-million dollar home, but has he considered that it's only worth that much money if someone is willing to take it off his hands for that amount?

Da-amn. That is one ugly house. I believe it even tops the Hong Kong Central Public Library in ugliness, and that building looks like a greek temple had an unfortunate collision with a glass skyscraper. Under a bucket of pink paint.

Ahhh...yes. I had managed to forget the unfortunate tendency towards pink buildings in Hong Kong. Thanks for the reminder!