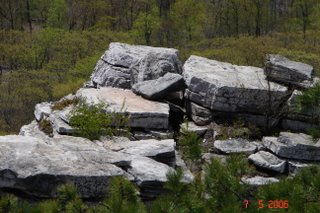 A couple of weekends ago I went on my first hike of the year with a group of friends; Andrea, Erin, Tara (all three of whom work for The Nature Conservancy's Natural Heritage Program), Tara's boyfriend, Jake, and his friend with his 9-month pregnant wife, Joe and Michaela, and their two dogs. I must admit to being nervous, especially when Michaela joked about having an oxygen tank ready in the back of their SUV in case she went into labour, but her purpose was to hurry things along.

First, we went on an easy little hike up Bear Mountain. A lot of the topography here in upstate New York is very rocky. There were so many blueberry bushes along the trail, with little, pale, pinkish-blue flowers that are edible and yummy. Of course, the berries themselves are much better, but it's still too early here for them.

I've been seriously out of shape, but even I felt that the Bear Mountain hike barely qualified to be called such, so we headed off to Sam's Point for something a little more challenging. There it was dwarf pine barrens, a special and threatened ecosystem. It might not be much to look at (hence the term "barrens"), with all these short little pines that look like oversized bonsai. But there were birds and other interesting vegetation. 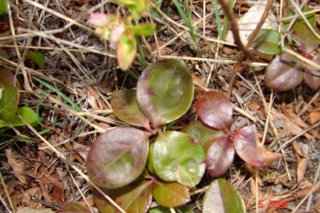 For example, this low-lying, unassuming plant is wintergreen. If you break off or buise a leaf and sniff it, it smells just like all those breath-freshening chewing gums. It being a well-frequented trail, we refrained from putting it in our mouths in case someone - or their dog - had decided to answer a nature call on it. 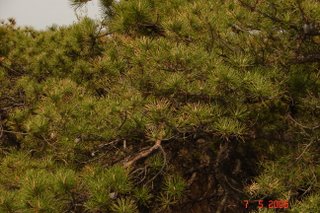 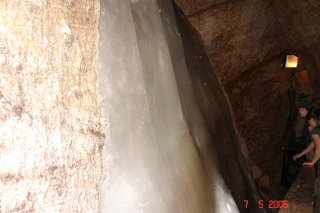 We ended up choosing the trail that led to the Ice Caves, so called because it's significantly colder once you get down there. It was a beautiful, warm (but not too warm), sunny day - a perfect day for a hike. But once down there it was like being in a meat cooler. According to Tara, who'd been there before, there's ice there even in the summer, although a lot of it melts off. Since we went in the spring, there were heavy layers of ice underfoot as we scrabbled to climb back out, and you can see there was a great, thick wall of the stuff. 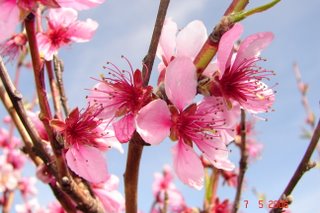 Here and there, flowers were in bloom, although the dwarf pines really dominated. I did see something pretty amazing (I'd never seen one before) right outside the entrance to the Ice Caves. It's a Luna Moth. It was so conspicuous, perched there on the rock, but everyone else marched right past it! I was afraid to get too close, in case I scared it off, but I managed to get one or two fairly good shots of it. The photo doesn't do it justice; it's a bright, leafy green edged with hot-pink! 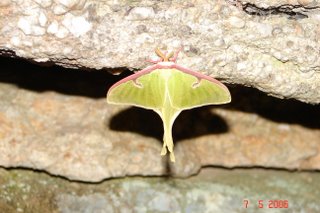 Looks beautiful! What camera did you use?

I used my Sony DSC-H1. I'm still trying to learn how to use it properly!

OOOhhhh, I want your camera!!! You're doing a great job so far.