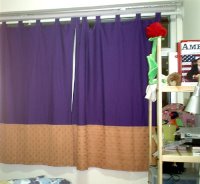 This doesn't all fit in one category, so, here we go.

Lessee. Where've I been? Finished moving into my new apartment, finally. This was an Ordeal since it involved several rounds of buying furniture, and then assembling it all. There is nary a piece of furniture here (except the bed) that Boyfriend and I did not assemble ourselves. Lucky I have an electric drill. Yes, I had to assemble that bookshelf you see there.

I've also been sewing. See here the curtains I sewed for my bedroom. Excuse the hideous colour choices. Since blocking light on the cheap was my primary concern, I bought dark purple material for HK$10 per yard (black seemed too gloomy). But I found that I did not buy enough dark purple material, hence the added orange bits at the bottom. I soon found out why that material was so cheap. It is so incredibly stiff that it breaks sewing machine needles. You can not sew through more than two layers of the stuff without snapping your needles in half. I had to add the tabs at the top by hand. Maybe it was coated with some wax or something, because it softened up considerably after washing. It also shrunk. Diagonally. Lesson learned: always wash material before sewing. 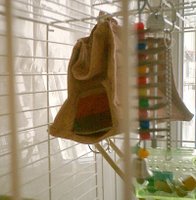 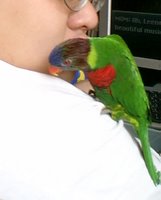 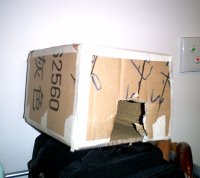 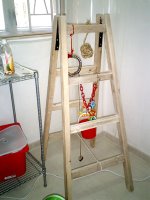 What does get more parrot appreciation is this. The landlords left this wooden ladder behind after renovating our apartment. It was totally covered in plaster and paint, so I spent an afternoon sanding that off. Plus I sawed about a foot off the bottom so that it would take up less space. Then I hung parrot toys all over it. It has been duly claimed as parrot territory. 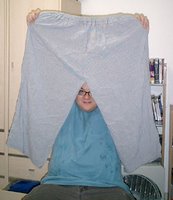 And finally, for your amusement: Boyfriend Pajama Pants. Boyfriend has trouble finding large enough pajama pants here in Hong Kong. But having sewed these pants in his absence, I discovered that I made them large enough to get two of him in them. Ah, the wonders of elastic.
Posted by Kea at 3:01 AM