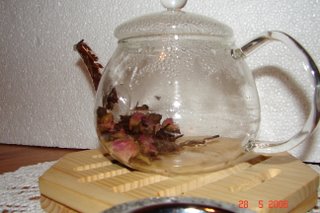 A lot of the time, Andrea and I have some tea and maybe a little dessert together in the evenings, and tonight was one such evening (no desserts, unfortunately).

I used to see big barrels of these small, dried rose buds in apothecary shops in Hong Kong, and packaged in Chinese supermarkets, but I'd never had rose tea before. I don't know anyone else who has.

When I went back to NYC for Mother's Day I decided to take the plunge. I've been learning more about tea in the past couple of years, and I felt it was time for me to approach this unknown. Funnily enough, a lady who spoke Mandarin stopped me in the little grocery where I bought it; she asked me how to drink rose tea! 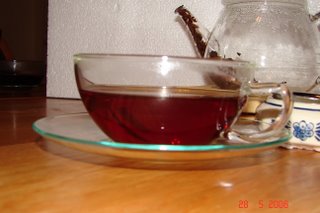 The blind leading the blind, surely. But I told her that you would usually blend it with some tea leaves, and brew as usual (suitably vague, I thought). I added that she should probably rinse the rose buds before brewing. (I have little faith in the cleanliness of Chinese processing plants.)

Moocow went to TeaSpot in NYC and bought me half-ounce samples of four different teas: two darjeelings, a ceylon and an assam. I absolutely adore darjeeling (definitely the champagne of teas), and I love good ceylons and assams, too. But somehow I felt that TeaSpot's assam wasn't as aromatic and flavourful as I'm used to. 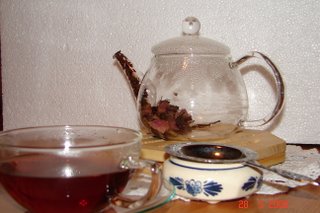 So tonight, when it came time to choose a tea to blend the rose with, I decided to use the assam. The dried buds, when I opened the sealed pack, gave off quite a heady rose fragrance. I didn't want it to compete with - and perhaps obliterate - the muscatel notes in darjeeling, and I wasn't sure if a green tea was up to the task of supporting such robust aroma. I felt the assam was non-descript enough, but strong enough, for the task.

I put the rose buds and assam into my lovely glass teapot so I could watch as it steeped. It's a good thing I decided against rinsing with hot water, because the colour left the rose buds pretty rapidly. It definitely developed a darker colour, with brandy-red highlights, than the assam alone would have. Andrea commented that even the leaves left in the pot are pretty.

What struck us first was the fragrance, recognisably rose-like, so delicious it had almost a honey/liqueur-like smell. Taste-wise, Andrea and I both felt that it didn't significantly add to or take away from the flavour of the assam as we were drinking. But, sipping it slowly, I think it did add a little more complexity to the otherwise bland assam. Andrea felt that the rose flavour came through in the aftertaste. I'm not sure if that was a good thing, in her mind.

I found the aftertaste a little musky, slightly acrid. I may have oversteeped while I was looking at the pretty colours, but I don't think so. I also poured Andrea's cup first and, even though I tried to distribute the weaker tea (at the top) and the stronger tea (at the bottom) between our teacups as you would pour tea Asian-style, I think I ended up with more of the stronger tea.

Next time, I think I'll try it with a Chinese green tea and watch the steeping time more carefully. The assam rose tea definitely made me feel extra special, and I hope Andrea felt the same too (Andrea's been having grief with her grant proposal). It was lovely, if only I could do something about that aftertaste. More experimentation ahead, but I would definitely recommend rose tea. Some time, when I can grow my own roses, I'll try using fresh petals or buds!

Many years ago my dad's friend, who is from Singapore, took us out to a Singaporean restaurant in San Francisco. He ordered rose petal juice for both my sister and me. I was eager to try it, but after tasting it, I knew I wouldn't be able to finish the glass. Roses don't taste as nice as they smell, apparently. However, my friend Rita bought some rose tea at a French-style tea shop and that tasted really nice. I forget the exact contents of the tea, but in addition to the rose it contained a variety of leaves and spices that made the tea work.