This summer we put in two planter boxes at the end of our landing strip of a back yard and filled them with jalapeno plants, tomatoes, bell peppers, cucumbers, basil, oregano, and green beans. This week the cucumbers have finally started to reach their full size.
So what to do with a glut of cucumbers?
Dorie's tzatziki recipe came at exactly the right moment. We were going to have some friends over for dinner, and with our overabundance of basil, we came up with a "summer bounty" themed meal, with tzatziki and hummus for appetizers, a garlicky classic pesto as the main course, and an open-face fresh blueberry tart (from Rose Levy Berenbaum's incomparable recipe available here) with meyer lemon curd for dessert.

As an aside, this was our fifth or sixth batch of pesto this summer and it was the best yet. The secret? Pan sear the garlic in some olive oil before adding the whole shebang to the pesto, it makes all the difference! 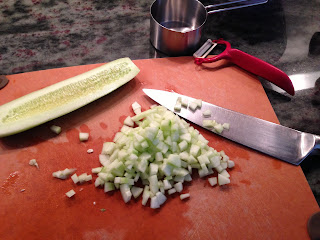 I'd never made tzatziki before and even had to look up how to pronounce it, but now I wonder why I hadn't. It's quick and easy to make from pantry staples - I had everything in the ingredients list except for dill, which was easy enough to fix. I ended up only dicing up 2/3 of a cucumber for 1 cup of yogurt; this was half the amount of yogurt that the recipe called for, but I liked this ratio of cucumber to yogurt better. The remainder of the cucumber I cut into finger-length sticks for inclusion in the appetizer plate with some carrots and celery. I kept the amounts of everything else in the recipe the same, except the white pepper, which was to taste.

As it's a shame to waste perfectly good zest, I also added lemon zest from the lemon that I juiced. One average-sized lemon gave me the 2 tablespoons of lemon juice the recipe called for as well as what I needed for the blueberry tart filling. 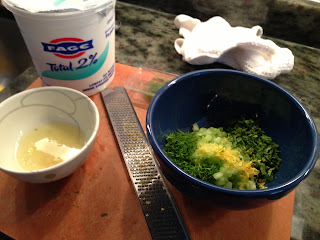 There just happened to be fancy Greek yogurt in my fridge, but once the dip was mixed up, Dorie's instructions became obvious: if you are going to make tzatziki, please, please, please make sure you use only the best, thickest Greek yogurt you can find. Alternately you can thoroughly drain some good-quality yogurt. Otherwise the tzatziki ends up more like a watery mayonnaise, rather than a nice, thick dip, which is what you want.
The hummus in the back is sprinkled with olive oil and some precious Israeli zaatar that my awesome friend Sarah brought back from Jerusalem for me. We didn't finish all the tzatziki that night, so I was able to taste it again a couple of days later, and yes, it does get better after the flavors have had a chance to meld together. I'll definitely be making more of this before the end of cuke season.

Welcome to FFwD. This is the perfect recipe for the season's cucumbers. Looks like you presented a nice appetizer platter. I served mine with hummus as well.

Welcome to FFWD - your garden looks amazing. How fun to be able to try this with your own cucumbers. The Israeli Zaatar is quite treasure!

Thanks for the comments guys - I've actually been with FFwD since 2012...! I've been MIA in the last year because school and work got to be too much, but I look forward to being an active part of the group again now!

Welcome aboard!
Your summer bounty meal sounds great. (P.S. - I love Fage, it's great stuff - their production facility is one town over from where I live).

I am so jealous that you used your own cukes- great job ! And your "runway" patio is just lovely. Yes, this was a fun one that has many of us converted to making it ourselves instead of opting for store bought. Great job.

OMG you planned quite the little affair!! I want to see your dessert too! Isnt it great to just go pick what you need from your garden? I love it!

Hehe, sorry 'mizer, I forgot to take a picture of the tart before it was inhaled. Next time!