The last time I posted about making sour cherry jam was also the first time I'd ever made any jam. That was also the time I set the oven on fire due to an overabundance of caution regarding maintaining sterility of all my equipment. I've come a long way since then, thank goodness. 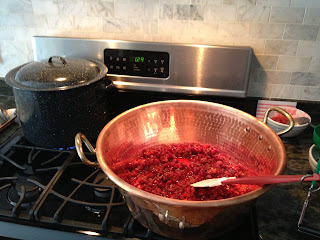 In the years since that first attempt, I have also acquired my dream piece of kitchen equipment - this beautiful, gleaming French copper jam pot, a.k.a. une bassine à confiture. Even its name is glorious. Just look at it! (Thanks Mei Yee and Kaka for my birthday gift!)

Aside from being good looking, this pot really made the process a LOT quicker. This is due to two reasons. One, copper is a superior conductor compared to what you usually get in cooking pots (aluminum, steel). Second, the wide basin allows for quicker evaporation. These two features together mean that the jam was ready in about 1/3 less time than even when I used my lovely copper-core All Clad stock pot. As I had 15 lbs of cherries to can and it was about 101F outside, this meant that I did not heat up the house nearly as much, and it was waaaay less humid when the whole process was done. Copper pots are not an inexpensive proposition, but if you can afford one and can often, I highly recommend investing in one. To put it in perspective, it'll cost you less than a pair of designer shoes or handbag, and will last much longer. 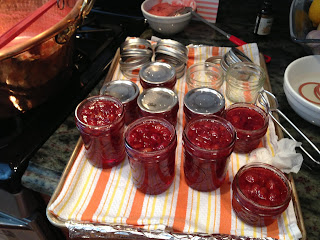 This year's batch made 18 jars plus a ziplock bag of ~2 lbs of cherries that I froze for future pies. Til next year!
Posted by MooCow at 2:19 PM