So the hubs got a new job almost a year ago now, and his company headquarters is in Washington State - about as far away from Washington, D.C., as you can possibly get without crossing water or Canada. About twice a month is he flies out and leaves me and the cat to fend for ourselves. I could be sad about it, but that's not productive. Don't get me wrong, both the cat and I miss him. But he'll be back. And while he's gone we take advantage and eat stuff that he won't eat. Like thousand year eggs in congee. Or soft-boiled eggs and asparagus. Or braised duck tongue. Or sushi. You get the idea. I could eat this stuff while he's around too, but that would mean cooking two separate meals, and while I love to cook, I love my free time too.

While he was gone this week then, with the FFwD recipe, my single girl meal treat was duck breast. I've always wanted to know how to cook duck breast but never got around to it, so I was happy to see this recipe come up. We are lucky to live in a neighborhood where we have a specialty English butcher. I  picked up a vacuum packed 1lb package of magret duck breast, which was enough for two. At almost $17/lb, I was glad not to have to buy another! It had been a loooong week at work and school, so I invited a friend/coworker over to share. Lisa brought some rosé and a loaf of fresh bread over, I mixed a couple of bourbon cocktails, and we nibbled on Comté cheese and home-made pepper jelly while throwing dinner together. Not bad for a weeknight!

Before she arrived I roasted some cauliflower in the oven, and left it in the 250F oven while getting everything else ready. Please forgive the lack of a mise en place photo, or one of the duck breasts searing in the pot - Lisa and I were having such a good time chatting I just forgot! Besides, I'm not sure I could have taken a decent photo of the duck searing and fat rendering process. There was a LOT of fat spattering, despite the use of the cast iron casserole, and I ended up covering the pot with a splatter screen.
Once the duck was seared, the rest of the process was very quick. Below is the balsamic vinegar and wine sauce coming together. I didn't have the port that Dorie called for, but I did have a bottle of French orange liqueur, Gran Gala, which is much less expensive and slightly sweeter than Cointreau or Gran Marnier. It was so sweet I figured it would be a good stand-in for port. We already know that duck and orange go together well, and with so much vinegar in the sauce, I wasn't worried about the sauce not pairing well with the peaches.


I think I left the duck in the oven more than 5 minutes - probably closer to 10 - because my peaches were not that ripe and took longer in the pot, but they came out medium-rare and perfect. This was a delicious, quick recipe that I will definitely make again, although I would make sure to have riper peaches, and cut them into smaller pieces to make a more attractive plate in future. I complained, briefly, at the cost of the meat, but then the hubs pointed out that halibut or tuna is $21/lb at the market and we have that about once a month.

The sauce was outstanding. For those of you who don't really drink port wine, I would recommend using a strong, sweet fruit liqueur as a substitute. Aside from orange, you could try cherry, peach, or apricot (if you can find it). If you do try it, make sure to leave a link here and share! Bon appétit! 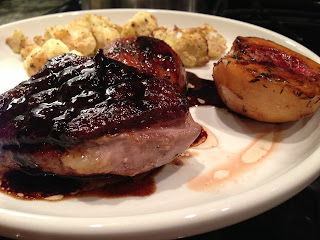 That looks absolutely delicious and I am sure the orange liqueur was a perfect pairing. Sounds like
fun to be able to share with a friend. Have a
wonderful weekend.

How nice you get to eat what you enjoy while he’s away! I used to do that when my husband would be away on business…and I got to watch what I liked on TV without someone using the remote every 5 minutes!
Your duck looks delicious. So glad you enjoyed it! The orange liqueur sounds like a great substitute for the port.

Bourbon Cocktails, Comte Cheese, and Rose, along side a duck breast - who needs a husband full time?

So do tell more about the bourbon cocktail....

When my husband is away, I like to cook eggplant which he despises. A splatter screen is a must when cooking duck. I can't believe how much fat it gives off. This time, I saved the extra duck fat and roasted potatoes in it. Yum! Your version of this dish sounds delicious.

Hey gals, it looks like I'm not the only one to take advantage of my single girl status! We should all post the fun things we do while they're out - I'd be interested in seeing your adventures!

Christy - my bourbon cocktail is basically a bourbon-based sidecar. Classic prohibition cocktail that is totally delicious when made right!

Betsy - what a fabulous idea for extra duck fat! I will have to remember that for next time, thanks!

What does braised duck tongue taste like? I think I'll stick to duck breasts and duck legs and duck confit but tongue??? You seem to have made lemonade out of lemons when your husband was gone. A lovely dinner, a wonderful evening filled with fellowship and good drink. Sounds good.

wow thats a nice blog.keep it up. Actually I am very much glad to see your all recipes. :)

you can write article so good and improve my skill thank you so much .
Best Candid photographers in Jaipur
Seo company in jaipur
vip escorts service in jaipur