Last week was finals week so grocery shopping was kinda low on my priorities list until after I had handed in my papers and completed my Infectious Disease Epidemiology exam on Wednesday. Then it took me a day to recover my wits so I didn't even look at the recipe until 10pm on Thursday. As a result, I started this on Friday, but didn't bake it til Saturday. That still counts as a French Friday, non? Well, it's done, and here are the results.

Dorie was not kidding. This was a really, really, really soft and sticky dough. I kneaded that thing for 10 minutes and it still looked pretty much like the photo. As she had said that it should pull away from the bowl but still be soft enough to pool at the bottom of the mixing bowl, I ended up adding about another 1/2 cup of flour. It might have had something to do with my flour, which was made from hard spring wheat and therefore had less gluten. 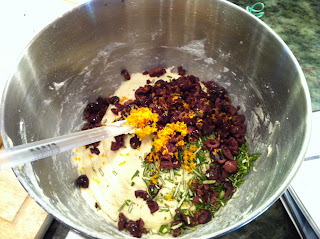 A photo of the mixings going in here. By this point both my husband and I were tired of hearing the mixer screaming, so I just mixed it in by hand. It was still tough work though - I wouldn't have wanted to "knead" this dough without a mixer. The consistency is such that the cook basically has to beat the dough like a batter, not actually knead it. I made the full recipe here, so these photos only show one of the two fougasses. As you can see, once spread out they are quite large. These are half sheet pans here. I thought it looked pretty much like the photo in the book - like a leaf, albeit a stubby one - but the hubs took one look and said it reminded him of Predator's face. I'm still trying to figure that one out. 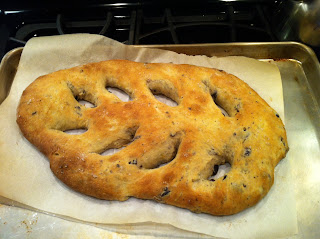 The hubs doesn't like savory things in his bread, so it's up to me to eat this whole thing (the other one went to our neighbors). Verdict? Not my favorite bread, although its perfectly good and the recipe works - I think I just can't help but compare it to focaccia, and then I decide that I like the richness of focaccia better. It's focaccia-like, but with so much less oil in the bread, it's less tender and fragrant than actual focaccia, which is cooked in a sheet pan full of olive oil. The crust is a little crunchy from the olive oil-water mix that is brushed on, and the inside chewy-tender. I had a bite of it today after it had sat out all night and it was still chewy and soft, which is nice. Good for a casual nibble and definitely pairs well with red wine, but if I were to make this again I think I'd just make little rolls so I can freeze them and reheat for a bread basket.
Posted by MooCow at 4:47 PM

Your process photos are lovely….and your fougasse came out beautiful!

Your bread came out beautifully.
I think I agree - I liked this bread, but I would much rather have my favorite focaccia...

This reminded me of focaccia too. Nice job!

Your bread looks great! I think mine seemed richer because I forgot about the part about Water plus olive oil brushed on the top. I only used olive oil...

Glad you enjoyed it, and welcome to the group.

You did a beautiful job of shaping your fougasse. Predator face or no.