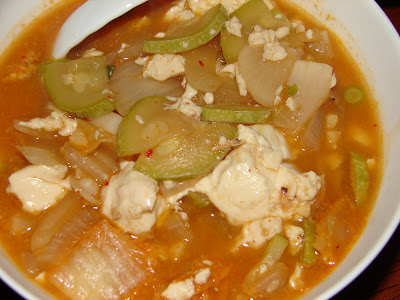 I had car trouble today, and my year-old grey VW Rabbit (his name is Peter) had to get towed to the dealership today. Some waiting ensued. The car miraculously fixed itself, I was charged ridiculous amounts for an oil and filter change, but I did get something out of all that: some better soon dubu (a Korean tofu stew). I've tried making soon dubu before, following a recipe I found online (I can't remember where), but although it satisfied my craving of the moment, the flavour just wasn't as complex and intense as I've had at Korean restaurants. 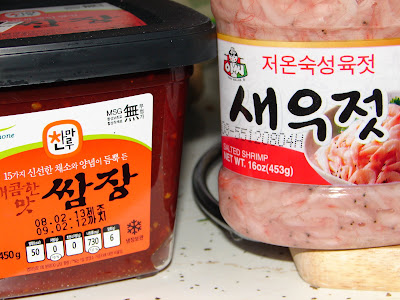 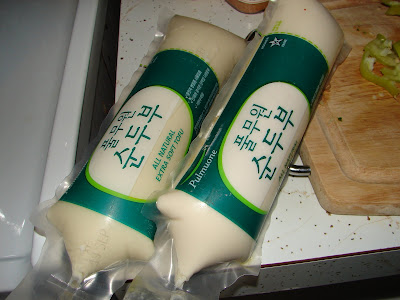 Soon dubu is all about the tofu. I can never get enough of the extra soft, extra silken tofu you find in little tubes. I got these at the Korean grocery, too. 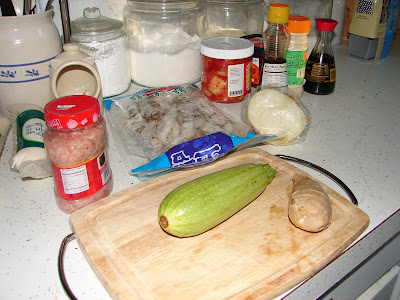 That zucchini/squash is from the CSA, but I think it is (or is very similar to) the type of squash I saw at the Korean grocery, and that I've eaten in Korean restaurants. It has a slightly softer texture and more delicate flavour than the darker green zucchini you can normally get. 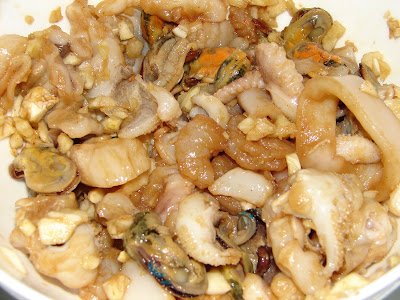 I departed seriously from the recipe. What follows is what I did, and not necessarily what you should do for an "authentic" recipe. Instead of beef or pork, I had a seafood mix, which I marinated with ginger juice (I grated, then squeezed, a large piece of ginger), minced garlic, sesame oil, white pepper and soy sauce. 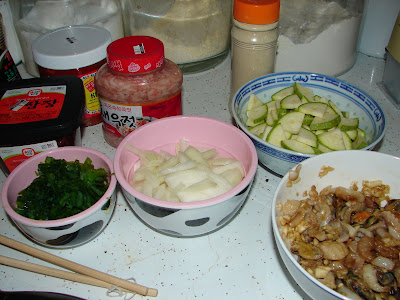 In addition to scallions, I added the squash, onions and daikon. 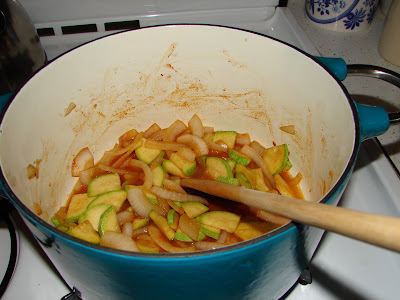 I started out sauteing the onion and squash (I would have added the daikon at this point, but I forgot I had daikon until later in the cooking process), and adding chili powder, salt and a little bit of soy sauce. Then, I added water (you could also use beef broth) and kimchi (I added my daikon in at this point, too) and brought it to a boil. I used some of the cooking liquid to thin out a bit of the chili soybean paste, and added that back to the pot. The tofu is gently spooned in, then the seafood is added. After a couple of minutes, I stirred in some salted shrimp, chopped up hot peppers, and the scallions. 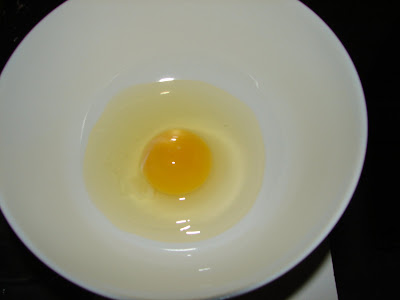 The recipe I based this all off of said to put a raw egg yolk and some sesame oil on top of a bowl of soon dubu for serving. I just cracked an egg into the bottom of a bowl and ladled some hot soon dubu on top. Soon dubu should be served very, very hot, with steamed rice. 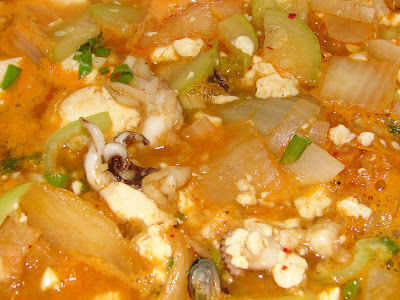 Soon dubu is very quick to make, no long cooking times involved. This was a definite improvement on my previous attempts, but it still isn't as richly flavourful as I remember it ought to be. Next time, I may actually use beef, and see if that helps.
Posted by Lana at 8:27 PM

I think using beef broth would go a long way towards adding complexity.

Soon dubu is quick to make, but really hard to make exactly right, even the Korean places don't always get the flavor exactly right. I really only ever eat it at one place anymore since they only seem to be the ones who can get it consistently right -- no idea what their secret is...but I think they do use a beef broth as the base (actually a beef bone broth).