This year, as with last year, I am helping out at the Fox Creek Farm CSA, which entitles me to some free produce every week. At this time of year, the fresh vegetables are coming in in such abundance, it's a challenge to keep up. Moocow told me about a Farmland Vegetable Pie recipe on Epicurious.com that could make use of a lot of the produce that I am getting now. Tonnes of summer squash, tomatoes, scallions, garlic, corn and basil. With squash coming out of my ears, I settled in to make this CSA pie (about a week ago now) with something that felt like relief. 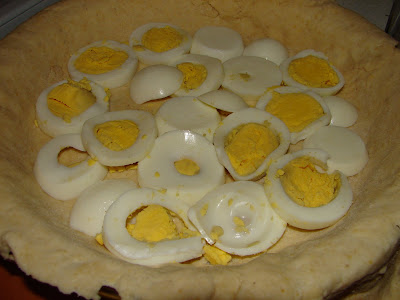 I made the crust using the instructions in the recipe, which uses a mix of all-purpose flour and cornmeal. This is a double crust pie, and the bottom crust is lined with slices of hard-boiled egg. 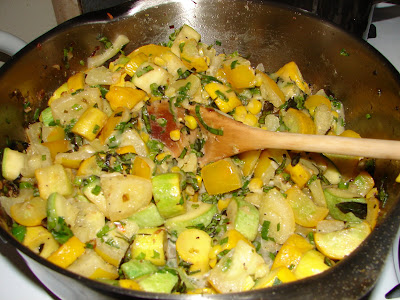 I cooked up a big pot of pie filling. Although I had red tomatoes, I decided to buy yellow tomatoes (which are used in the recipe), and I really liked the way they tasted and looked. The cut pie looked like a slice of sunshine. 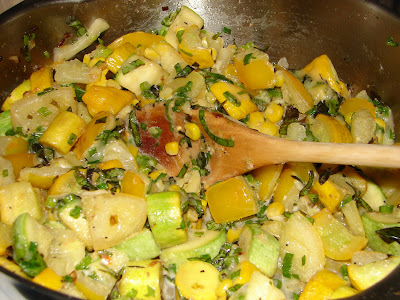 The recipe also called for okra, but I didn't have any. I just put in more summer squash, and some onion. I think the okra would have helped to bind the filling together some more. However, since I cooked the filling first, before putting it into the pie, I was able to drain away a lot of the excess liquid. (Also, the recipe tells you to salt the squash and drain it, and press it dry, which helps.) 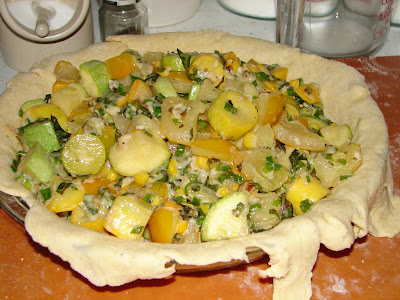 My medium-sized pot full of filling was more than enough to fill the pie. Leftovers are good by themselves, or in an omelette After adding the top crust and cutting some vents in the crust, it went into the oven. 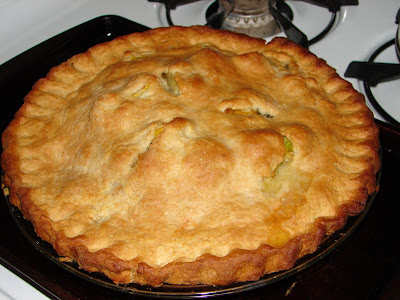 The pie tasted delicious. The filling was light and full of the bright flavours of fresh summer produce; it makes for a pleasant change from cream based fillings (although there was cheese in the filling). I wasn't that impressed with the crust, however. It was dry, bland, and not very flaky at all. If you're thinking of making this pie, I would go with a different recipe for the crust.

The crust notwithstanding, I would consider this recipe a success. Just remember to read the instructions over carefully before you begin, to streamline the process. I think the recipe can be very versatile; you can use almost any vegetables that you may have lying around.