Did you know that I absolutely adore chicken pot pie? Even when they were a bit of a goopey mess in the college dining halls, or the pre-made frozen affairs you find in the supermarkets, I adored them just a bit. But I had never made my own chicken pot pie before. Recently, I was telling a coworker about the CSA pie that I had made, and he said it sounded a little like a chicken pot pie, without the chicken and the cream. And he went on to tell me how easy chicken pot pie is to make, and how his father makes a really delicious one. Well, how could I resist? I had most of the makings of a chicken pot pie already, I just needed some chicken. (Another bid at using up CSA vegetables.) 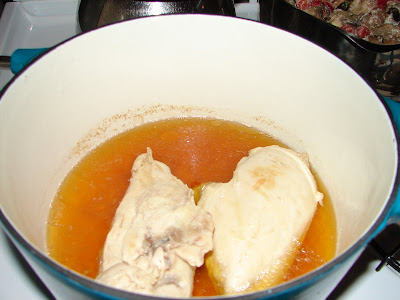 Since it was my first attempt at this, I followed a recipe from Cooks Illustrated. First, you cook some chicken breasts in chicken broth. Then, you saute some vegetables (onion, celery and carrots) until tender-crisp. A sauce is made with butter, flour, the broth, and milk. Once that thickens, you mix in the chicken, vegetables, peas (I used cut up green beans) and parsley. Season with salt and pepper. 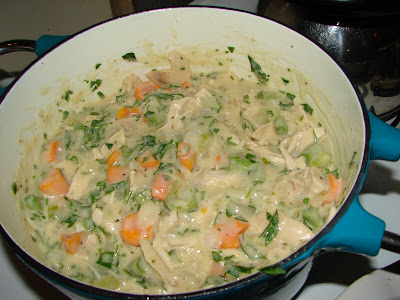 It was late when I got home that day, so I didn't want to bother with making my own crust. Instead, I bought some pre-rolled crust from the supermarket. I wanted a double-crust chicken pot pie, so I followed the instructions on the box to blind bake the bottom crust. Bad idea. 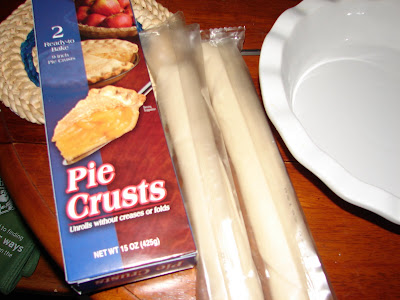 The instructions had said simply to prick the crust and bake it. I should have followed my instincts to line the crust with parchment paper and fill it with some pie weights (a.k.a. dried beans). With the crust so shrunken and inflated, I had to abandon it. Good thing I had the top crust left. I would just have to make a single-crust pie. 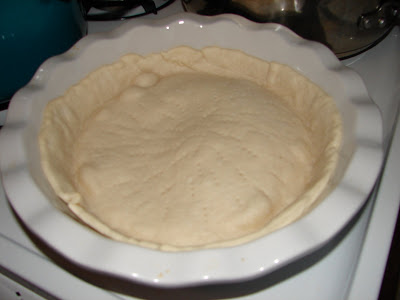 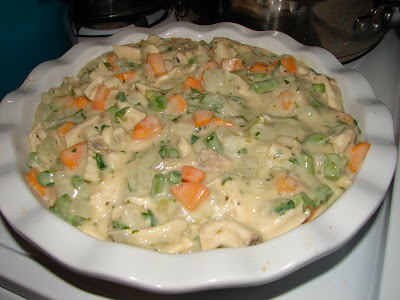 The pie crust goes on top, with vents cut in. I put the pie plate on a baking sheet before putting it into the oven, which was a good thing. The filling bubbled over and out the sides a bit, so the baking sheet saved me from a big mess in the oven. After the filling was bubbly and the crust golden brown, the pie was ready. 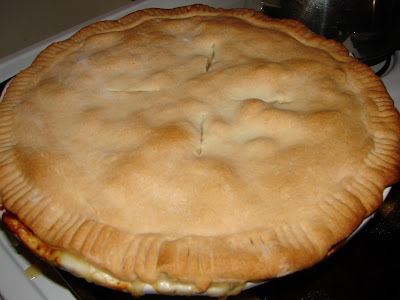 The filling tasted great, although I probably should have put a little more salt in. All the farm-fresh vegetables that went in, still ever the slightest bit crisp (instead of overcooked and soggy) gave the pie a wonderful texture. I shouldn't be lazy about the crust next time, though. I should definitely blind bake with pie weights. Also, the pre-made pie crust was sweeter than I liked. It could just be the brand that I purchased, but next time I may decide to make my own crust. Or, perhaps I'll just top it with biscuit dough. If I had enough ramekins, I could even make single-serving pot pies. Yum!
Posted by Lana at 2:17 PM