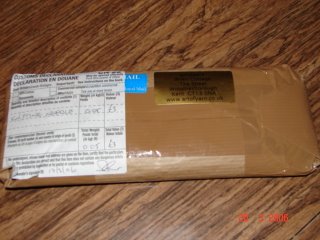 When I received my fuzzi felt in the mail I wanted to get started right away with a Blackberry. Unfortunately, I couldn't get the right gauge with the needles I had (I tried 6mm and 6.5mm). I figured I needed 7mm needles, and they're not a size that US knitting needle manufacturers make.

So I went on Ebay and ordered a pair of Pony 7mm circulars. There they are, courtesy of the Royal Mail and ArtofYarn! Now, I'm sure there are a lot of wonderful knitters in Hong Kong but, when I was living there, it wasn't the easiest thing finding quality yarns (i.e. not scratchy acrylic) and needles. I learned how to knit and purl when I was in Hong Kong, but never really did anything with my knowledge (and had to teach myself all over again later) until I came back to the U.S. for college, and I think that is the reason. That and the fact that there weren't many good knitting books written in English available. Aaaaaaanyway, what I wanted to say was that my first pair of circular needles was a pair of Pony needles (manufactured in India), which I used to knit the Peppermint Kimono Scarf and a shawl for my mom. I do miss the food in Hong Kong but, for books and knitting, I'm glad to be back! 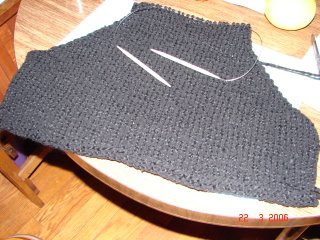 I started the Blackberry in R2 Fuzzi Felt yesterday. This is going to be for my supervisor at work (even though I've quit, YAY!!!). I believe I will christen it Fuzzberry, for obvious reasons.

The Fuzzi Felt is kind of cool. It's constructed from two strands, one which has an almost suede-like feel and is fuzzy, the other which looks a big like lopi yarn, and they're twisted together. These two very different strands make it kind of difficult to splice ends when I'm joining in a new ball of yarn, but I've been managing. However, I've knit two balls of it and found two knots already. I think I'll keep a knot count. My knitting yesterday produced the back piece, which I will now place on stitch holders. I think I'll do the sleeves next, since they take the longest. After I finish the sleeves, I can also sew them to the back piece first (because of the raglan construction), and thus break up the task of finishing. It looks kind of charcoal-grey in the picture, but that's just overexposure. It really is black.