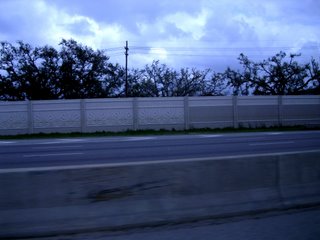 Just arrived in New Orleans! First time this far south, although New Orleans isn't really considered part of the real South. Coming in for landing, we could already see that the roofs all over city was dotted with the blue FEMA tarps indicating where Katrina had made her mark. It's muggy and warm, and threatening to storm. My travel buddy Jaime and I hailed a cab straight to the hotel. When we asked how business has been, our driver, Carlos, told us he'd been waiting since 10:00 am for customer. It was 12.30. After he was done with us, he said he was giving up and going home, coz it wasn't worth it to hang around for another ride. On the way in he pointed out the long yellow line that marked the water line....we followed it all the way downtown like the Yellow Brick Road. This picture is kinda dark, but the faint line can be see on the sound barriers along the highway. Before he dropped us off at the hotel, he gave us his cell number, and we both promised to call him for rides when we leave New Orleans. 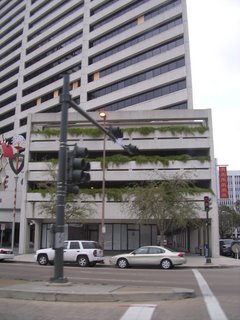 Driving downtown, many of the skyscrapers had wooden panels boarding up windows that had been blown out. 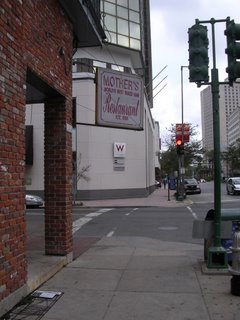 Around the corner from our hotel is Mother's Restaurant. We bumped into the Mayor of New Orleans having lunch in the back room with his posse.

I didn't have enough moxy to take a picture of him, but I did take shots of my first New Orleans po'boy (all right, it was a weakling version of chicken, but I figured I have all week to do this!), and the incredibly long lunch line that just kept going and going. 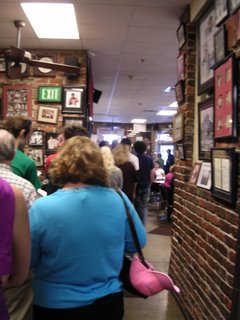 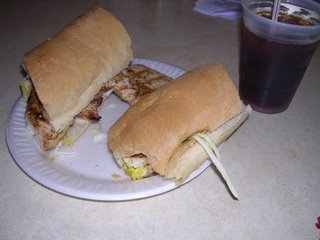 Our hotel is quite nice, with lots of old beams, exposed brick walls, and a light-filled atrium in the lobby. Everything's in working order, except the snack shop is half empty, there was a sign announcing that the ATM has just been reinstalled, and the Omni down the street is boarded up. Several restaurants around us are still closed. Right outside is a streetlamp that was knocked over and hasn't been taken away yet. You can see it in the left foreground, right before the green newspaper box. 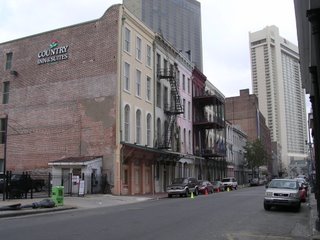 Very cool to get this first person perspective of New Orleans. I had an image in my head of it being a ghost town now, but it's far from it.

Enjoy your trip, Karen! Can't wait to see/hear more about it and the food!

Looks like you're having fun there, Moocow. Now I'm just waiting for the cow to come home. =)