Well, hello there. It's been a while. All the Bees have been busy. Kea and I are both back in school, while Lana has started a new job. It doesn't mean we haven't been cooking, knitting, sewing, and so on...we just haven't had time to blog it, which is a shame. I made some mean batches of sour cherry jam and blood orange marmalade this year for example...maybe I'll post about it later. After my finals. Yeah. If I do, Lana should post about her kiwi-lemon marmalade too.

Anyways, I'm back now, and for a reason - I joined the scores of other cooks who dish it up every Friday on French Fridays with Dorie!! I had purchased the book back in December to enjoy during our one-week staycation, after eying it longingly since before it was published (didn't think there was much point in buying another cookbook when I was working crazy hours and going to school). Since then I've been cooking my way sporadically through it and - remarkably for a cookbook these days - met with delicious success every time (except once, with the clafouti. That was such a spectacular failure there must have been a typo somewhere). So I made it official and joined the group. After all, no matter what else is going on in your life, a girl's gotta eat. 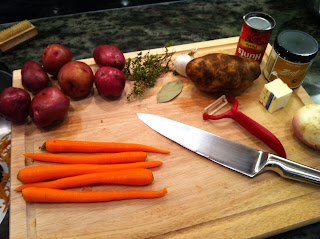 As you can see, pretty basic ingredients. Just like the majority of the recipes in Around My French Table. But looks can be deceiving.
After a quick browning, the veggies go in the pot with some flour, tomato paste, herbs, and beef stock. Bring to a simmer, then stick in the oven and let the dutch oven do its magic. 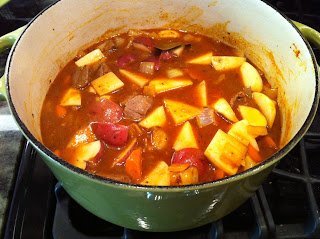 Apologies for the two pot photos. The second, post-oven shot was the last picture I took before we dug in, and I completely forgot to take a "plated" photo. Besides, stews are not particularly photogenic, and my photography skills are basic, to say the least, but trust me, the navarin was outstanding. Some friends stopped by while this was in the oven and remarked at how wonderful the house smelled. We would have invited them to stay for dinner as there was plenty, but they were vegetarian. Hehe. More for us. 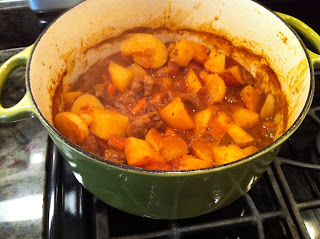