Winter seems to have come and gone early this year. It was hot through November, freezing in December, miserable through January, and then unexpectedly warm and muggy in February. Now the cold seems to be making a final comeback before we launch full on into rainy season, and it's only the beginning of March.

So I never got around to blogging about my knitting projects because I thought winter would last a bit longer. In fact, by the time I got anything made it had already started to get warm. Here are two scarves I made to replace my favourite fuzzy brown scarf I lost on the train, but by the time they were done, I didn't need to wear them anymore.

This is the stripy scarf I made out of various leftover scrap balls of yarn. I didn't think apple green and maroon would ever look good together, but spaced out with the grey, the combination isn't bad. Unfortunately, I made the classic rookie mistake of knitting in stockinette stitch, and now it's got a fearsome curl that even steam-pressing won't eliminate. I'm thinking I'll have to sew a backing on to straighten it out, but haven't decided what to use. Fleece might be too heavy (and expensive!) and I don't fancy the thought of knitting another piece that long in plain garter. I do have a mile of maroon T-shirt material in my closet that was given to me by my mom's friend who owns an underwear factory in Shenzhen. Might look hideous though. 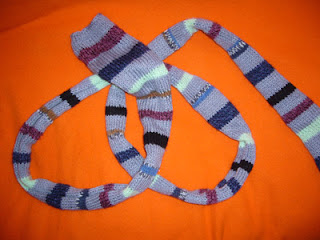 And here's my bamboo scarf. I bought three rolls of bamboo yarn from Spotlight, the giganto-Australian craft store that opened a branch in Kowloon Bay last year. It's a bit pricey by my standards, so I can't make anything much bigger than a scarf, which is really too bad. It would make such an amazing long cardigan or tunic. Bamboo is a surprisingly soft, silky, drapey fibre, and I can't help getting mental images of assembly lines manned by pandas chewing through the stuff. The only drawbacks are that the yarn splits easily (not a big deal) and that it must be delicately washed and can't be tumble dried. 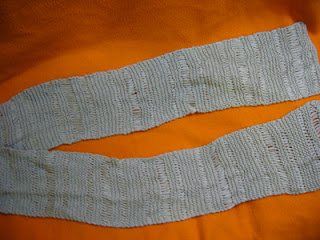 I did a simple slip stitch pattern to show off the length of the yarn, but now that I look at it, there's a bit too much garter stitch going on and not enough slipping. 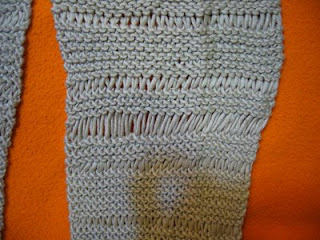 Guess that's what happens when you hate frogging even more than you hate following patterns.
Posted by Kea at 2:53 AM

Try going to the Techknitting blog - that's where I learned how to line a knit hat with fleece. There might be some useful tidbits in there on what you should do to fix/line your striped scarf. If you don't find anything, you can always write to her. She's already seen this blog thanks to me linking to her page on bumblingbees!