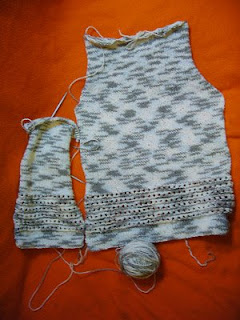 I managed to get to Fa Yuen Street market to buy some giant balls of discount yarn. For HK$15, you can get a ball of yarn almost as big as your head, yielding 2-3 times as much as a normal skein. The yarn merchants only come out in the winter - in warmer months, they switch to selling costume jewelry - and you'll probably never find the same colour twice, so you've got to load up while the getting's good.

Two giant balls of blue, white and grey variegated was just enough to make me a cardigan. For once, I managed to take a picture of while it was still a work in progress, so here's the back and part of one side. It's finished now, I just don't have a picture yet.

I'm not that happy with the colour, which puts me in mind of the Microsoft wallpaper background circa 1995 (there weren't many choices), but it was an opportunity to practice designing my own garment on the cheap. You wouldn't believe how many times I've had to rip it out and start all over again.

You see, I've imposed something of a dilemma on myself. I have so little patience with patterns that it's rare that I'd follow instructions from beginning to end for anything bigger than a hat. I don't want to make someone else's idea. I want to make my own. But since I won't follow instructions, I've limited my options for learning new techniques, so for years I've been basically stuck on "knit" and "purl".

To try to get myself past that, I bought a basic stitch dictionary. It lets me cobble together various stitches so that I can at least pretend that I'm innovating, which prevents me from getting bored. It's also useful for learning the basic principles behind knitting, which are never really explained in whole-garment patterns. So that's how I put my cardigan together.

I figure with all the frogging I did, I must've knitted two backs, three sleeves, and 1.5 fronts, just to make 1 sweater. You wouldn't want to subject expensive yarn to all that frogging.

I'll try to get a picture of the finished product up soon - it's in the wash due to an unfortunate parrot-related incident.
Posted by Kea at 3:33 AM

Kea, you intrepid knitter, I salute you! I have to admit that I am a lot less daring in my knitting adventures. It looks like you are picking up a lot of techniques. You go!

I to stand in awe of your knitting fearlessness. That's one awesome adventure you went on with $15!