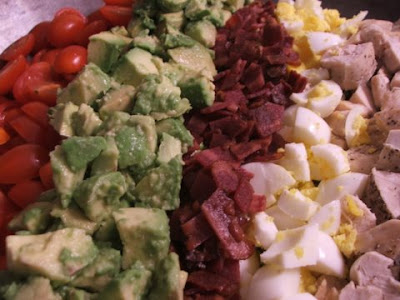 A and I have been spending Christmas and New Year's at home in Oregon with my parents. We had dinner on Christmas Eve at my uncle's house so, apart from A making some mashed potatoes to bring over, we didn't cook too much. For New Year's, we had my uncle's family over, and I was in charge of making dinner. After the excesses of Christmas Eve, I wanted to be sure that we had a slightly healthier (though still delicious!) meal for New Year's. I started early in the morning, marinating the chicken, baking dessert, and working on the cobb salad. 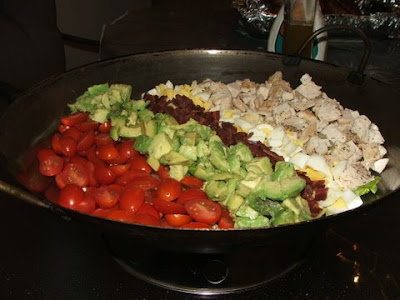 This was my first time making a cobb salad (a little too much trouble, wouldn't you say, for one person?), but I absolutely adore eating them; everything is perfectly bite-sized so that you don't have to have bits of salad green hanging out of your mouth. I roughly followed the recipe from Cooks Illustrated, making the dressing, but approximating all the other ingredients. I used turkey bacon instead of pork bacon, too. There was so much salad, and no big serving plates in the house, so I rubbed our wok with oil (to prevent rusting) and used it as a serving vessel; it was perfect. Everyone really enjoyed the cobb salad, and it was pretty much demolished. 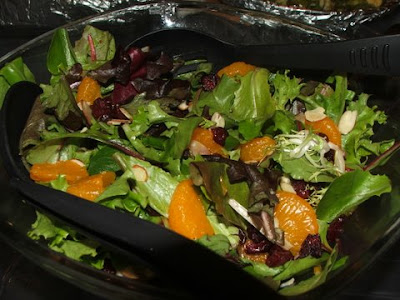 In order to encourage everyone to have more vegetables, I also made a simple Asian salad, with mesclun mix, sliced almonds, dried cranberries and mandarin oranges. I also made an Asian-inspired dressing to go with it, mixing together balsamic vinegar, soy sauce, olive oil, salt, pepper and a dash of sesame oil. This salad quickly disappeared, as well.

We also had oven roasted Brussels sprouts with whole cloves of garlic. A deemed them slightly overcooked, so he didn't take any pictures. But, as a fan of Brussels sprouts, I think they were still delicious. 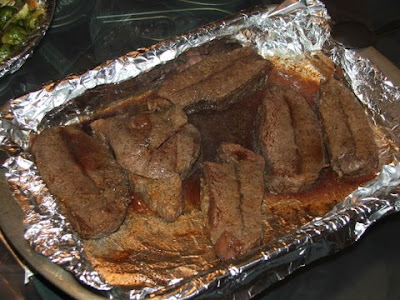 A was responsible for marinating and cooking the steaks. My family is not fond of sirloin, and normally goes for rib eyes. However, we've found that flat-iron steaks are excellent, too. Moreover, they are conveniently sized in approximately single-person portions, so we decided on flat-iron steaks, which were a success. Really, I think porterhouses and T-bones are over-rated. 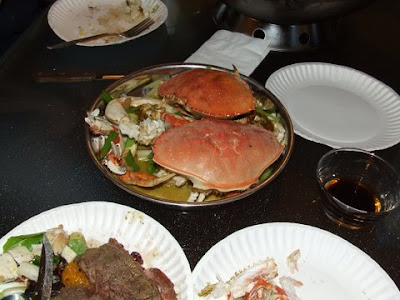 My uncle brought over two fresh Dungeness crabs, which we steamed Cantonese-style with ginger and scallions. These were served with dark Chinese vinegar. I'm a very lazy crab-eater, meaning I can't usually be bothered to eat more than a piece or two. With my added handicap of braces, I only had one piece, which was enough to satisfy me. 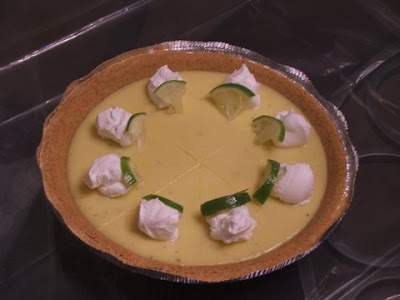 For dessert, A had requested key lime pie. This request, coming from him, surprised me, since he dislikes sour things almost as much as our father does. It turned out to be an excellent choice, however. Even dad went back for more, and it was deemed very refreshing after a large meal. 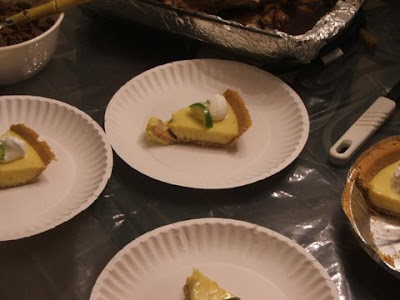 The only thing that didn't really get eaten was all the rice we had made, for the eight of us! We had so much rice left over, A made fried rice today (by himself, for the first time). I won't embarrass him with the telling of it (ask him yourself!), but the rice is all gone now, too.
Posted by Lana at 12:39 AM

That cobb salad looks fantastic! And it earns extra points for creative use of a wok! Whenever you're around, your family is the best-fed family in America.

It's also fun learning how your li'l bro's tastes and skills are being influenced by his big sisters. Train him well, you two.

That food looks so good. I'm sure all the veggies were welcome after the last two months of culinary overindulgence that is winter in the US.