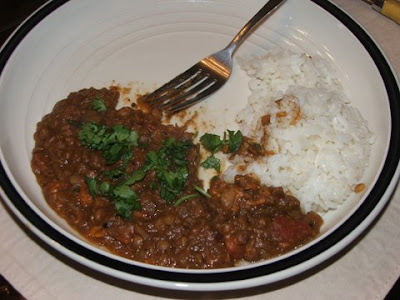 In a curious exchange of roles, I always worry that my parents, particularly my father, aren't eating properly. Just because dad is relatively healthy for his age, he insists on eating like a boy of twenty; beef, heavy sauces, tonnes of sugar in his coffee, and sweets. (I know where I got my sweet tooth from!) And then, when it's just the two of them, it's easy to get into a rut and eat all sorts of unhealthy and/or unimaginative (!!) things.

The thing is, I know they appreciate good food, and they can be made to be adventurous, too. So, I took a little gamble and made a Moroccan lentil tagine using our pressure cooker. I say it was a gamble because they don't often enjoy things with a lot of "foreign" herbs and spices (that is, those not normally used in Chinese cuisine), especially cumin, which the tagine has.

I still don't think my dad enjoyed this very much. He ate it, but when my mother complimented the dish and had more, he didn't say anything, which is tantamount to saying he didn't like it. However, my mother has never hesitated to tell me that something I made doesn't taste good, so I feel that I can trust that she truly liked it. A, who isn't much for stews, seemed to like it well enough, too. The greatest compliment came from my cousins, though. They tried some when they came over for New Year's dinner. They're terribly picky (at least, I think they are, but I'm a foodie), but kept going back for more.
Posted by Lana at 1:16 AM