Adding a fleece lining to a knit hat

This is Part II to the story of that white hat I knit following Elizabeth Zimmerman's instructions in Knitting Workshop. Nice hat, but unfortunately, it wasn't windproof. As I intended to give it to my brother-in-law to fend off Ohio winters, something obviously had to be done to beef it up. But how does one sew a knitted fabric to a woven one? The answer came from a wonderful blog called TECHknitting that shows you step-by-step, with clear diagrams, the solutions to all those questions that keep knitters up at night. I followed her instructions and here are some pictures.

First I pinned the fleece over my brother-in-laws head to make sure I had the right size. I then cut out the shape and sewed it up right-quick on my sewing machine. Coulda done it by hand, but the machine was there and made neater, closer stitches than I could ever hope to. As you'll notice in the picture below, the lining is a little bigger than the hat itself, but that's OK because the hat will stretch a lot, while the fleece (which does have horizontal stretch, but not vertical) will not stretch nearly the same amount. 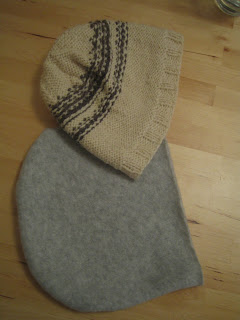 Next I flipped the knit hat inside out, and placed it INSIDE the new fleece lining, which was right-side out, as you can see from the picture. I then followed TECHknitting's instructions on how to use the overcast stitch to create a stretchy seam so the hat would stretch over the wearer's head, and voila, I was done! 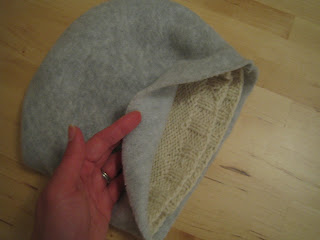 I didn't take a picture of the finished hat since it doesn't look much different and my brother-in-law wasn't around to model it anyways. It went in the Christmas care package I sent over (more on that later). He loved it, but unfortunately, so does his wife. She refused to take it off for the first day; by that night he admitted defeat. No worries though. I had more of the same lovely Green Mountain Spinnery yarn left, with which I knit him another in a Fair Isle pattern. I have lots of fleece left over so that one'll be lined, too, once he shows up to let me measure his head again. Thanks for the helpful and clear instructions, TECHknitting!
Posted by MooCow at 2:56 PM

You are welcome (but I don't write for Knitpicks--that must be someone else!)

Hrm..wonder where that idea came from, then? Sorry for the error. I have amended the entry. Thanks for taking an interest!