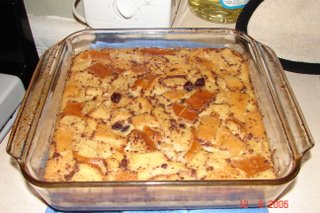 We had so many bread crusts left from the housewarming party that I decided to make bread pudding from it.

I'd never made, or even eaten, bread pudding before, but Andrea called her mother to ask for the recipe (she had it once as a child), and it was really simple. Throw a bunch of stuff, including eggs, milk, brown sugar, vanilla, cinnamon, raisins and the bread, into a pan and bake/steam. It turned out pretty well, and Andrea certainly enjoyed it. Despite being lactose intolerant, she popped her Lactaid pills and ate 3/4 of the pan!

*drool* You're making me hungry!!!

Sorry to say, but nothing makes me feel more ill than the thought of eating wet bread. I can't get my head (or stomach) around bread pudding. Glad you guys are enjoying it though!

I wasn't too hooked on the idea at first, either. But Andrea said that she absolutely loved it the one and only time her mother made it. And since I made it, I felt I should at least try a bite. And really, you can hardly tell it's bread. It's more like a custard pudding.

I like French toast since it's not too mushy if you brown it on both sides. It's soggy bread that I really dislike. I can just about tolerate custard.