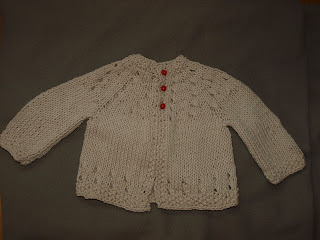 I've been drooling over sweater patterns for years, but it has taken me a long time to screw up the courage to actually attempt one. When I finally did, I was cautious and decided that a baby sweater would probably be a smart and manageable first project. This was especially daunting as it would be the first big project I would start without my knitting coach, Lana. Eventually (with some online help from Lana) I settled on this simple pattern that is knit in one piece from the top down. As a bonus, it also served as my intro to lacework. As with every new project, it started with the best of intentions and lots of excitement, but because of a pattern error I ended up doing and undoing the sleeve 6 times (yes....SIX). To say that was frustrating does not give the statement enough color. It also slowed me down considerably and made me very unenthused about the project for a good three months. 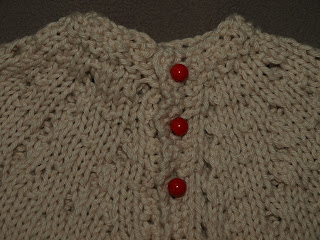 Last night I finally blocked it and sewed on the little red buttons. It's done! I'm glad I stuck with it, because it's quite lovely. I used a cotton/merino wool blend on a large needle so it's super soft and drapey. Hopefully the recipient and her parents think it's nice, too. 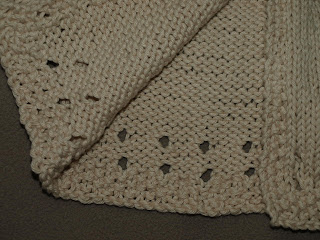 Now that I look at it, the arms look a little long, but then, what do I know about baby clothes?

NB: I was asked where the pattern came from. The good news: it was free from Knitwits Heaven. There were several errors discovered earlier and they had published corrections in blue but - the bad news - the last correction was dated September 2007. Beware, the sleeve error still exists on row 32, when you start the sleeve.
Posted by MooCow at 7:16 PM

Congratulations, MooCow! It looks beautiful! Kudos to you for sticking it out. When are you giving it to the lucky baby?

mailed it off yesterday!

Just myself working on a baby sweater that's tummy short with 3/4 sleeves. Seems to be the fashion lately. Your's looks lovely, care to share where to get the pattern?

Oh yes, I did forget to link to the pattern...I'll put it up. There is an error in the first sleeve - the stitch count does not make sense, but I ended up reading forward and making up my own solution. Let me know if you decide to do the sweater and need sleeve help!