"A" came to visit me and my DH yesterday afternoon. She has a serious sweet tooth so in honor of the occasion, I went shopping that morning and got the ingredients for this shortbread recipe from 101 cookbooks that I've been dying to try out. The little story behind the recipe is fascinating, but I won't recount it here as you can read the original account on Heidi's blog. The cute mini butterfly shapes she used were also an inspiration, so I drove out to Michaels to see what I could score as I had only large, palm-sized cookie cutters. It being two weeks before Halloween, the store was all stocked up for the holiday and I ended up with a set of mini Halloween-themed cutters for two bones. 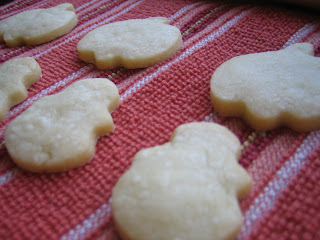 Like all shortbread recipes, this one does not contain any liquid. The most basic shortbread recipes contain only butter, flour, and sugar, but that's very basic, not containing even any salt. A pinch of salt is desirable though as it adds depth and complexity any cookie. The Hearst Castle recipe uses salt, all purpose flour, butter, and confectioner's sugar, and - the surprise ingredient - a touch of baking powder. Many traditional recipes use rice flour to achieve that delicate crispness that the best shortbreads offer, but I had never seen a recipe calling for baking powder before. My curiosity was piqued as most of the shortbread recipes I'd tried over the years yielded heavy, greasy cookies. 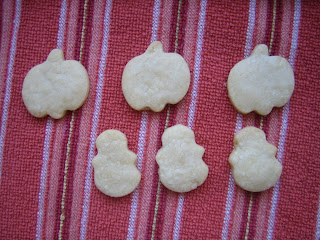 Half an hour before "A" arrived, I patted the dough together and wrapped it up. By the time we came back from our stroll around the Old Town historic district, it was properly chilled and we were ready to start cutting out our cookies. I showed "A" how to pound out the cold, stiff dough evenly with a French rolling pin. She took to it like a natural, clobbering the thing into a nice, even round. I also shared a pastry school secret to using minimal flour while preventing the dough from sticking to the counter - pick up the dough with a bench scraper and move it in between every roll so that it doesn't have a chance to be rolled right into your surface. We cut out pumpkin and ghost shapes and, looking at the amorphous ghosts, "A" joked that they could double as snowmen in two months. The cookies were shoved into the freezer for half an hour and 11 minutes in the oven later, we had ourselves these lovely bite-sized treats. The cookies are barely sweet, delicate, and with that elusive tender crispiness. I think I would like it a teensy bit sweeter next time, but otherwise it's the nicest shortbread cookie I've made. I was going to decorate them with orange icing, but they taste so lovely on their own, we left them alone. "A" is on the train back up to NYC as this is being written, maybe making a dent in the little bag she took with her.
Posted by MooCow at 9:02 AM

thank you for all the treats!!! did not share any of my pumpkins or snowy ghosts. :)

thank you for a great time and i'm so glad i didn't ruin the cookies. haha.