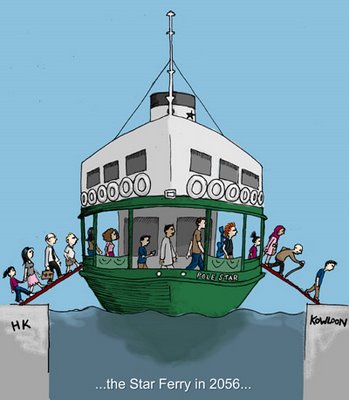 Here's a dying burst of nostalgia for you guys who haven't been back to HK in a while. They're demolishing the Central Star Ferry pier, and building a new one somewhere off by the IFC 2 tower. Here's an article. Click the link to see the picture of the new ferry terminal building - an awkward, Disneyish looking faux-colonial structure seemingly designed by cutting a lot of pictures out of travel magazines and gluing them together. I'm no expert or anything, but it looks like the architect borrowed a bunch of shapes from 19th century British architecture without understanding anything about the structure, proportions or visual balance of those buildings. This is our government's idea of historical and cultural enrichment, by the way. Perhaps I should be glad that it isn't pink, or covered in bathroom tiles.

When you come back to Hong Kong next time, the Central waterfront as you know it will be gone. They're putting a mega-mall on the site of the current pier. And then they're going to reclaim some land and put a highway in front of the mega-mall. If we're lucky, we'll get a strip of park in front of the highway - but nobody's going to bother to cross a highway to get to it, and so the waterfront will be dead, boring, ugly, and hostile to pedestrians - just like Admiralty. There's also some question as to whether the Star Ferry will be able to survive as a business in its new, inconvenient location. It expects to lose a full third of its passengers. Goodbye, Star Ferry, we loved thee well.
Posted by Kea at 4:48 PM