Knitting Is An Adventure 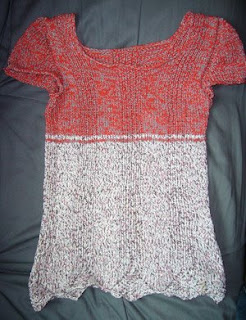 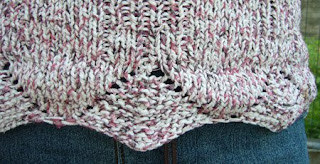 When I started this project, I didn't know how it was going to look. I had a vague image in my head of a square neckline, and some patterning on the bottom edge, and knitting it in the round so there would be no seams, but other than that, I really had no idea.

The white-and-red flecked yarn was another one of those discount balls from a Fa Yuen Street yarn stall... It appeared to be made of cotton, and thought that it would be enough for a tank top, but I was wrong. I ran out when I was nearly up to the armpits. 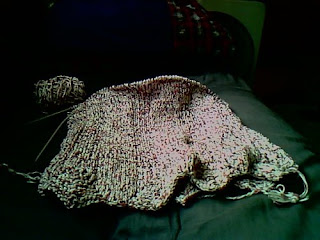 So, it was time to find some more yarn. I knew I wasn't ever going to be able to match the colour, but I figured a colour change would look OK. I raided the yarn stores and found myself two balls of deep orange cotton, and another two balls of grey lace weight crochet string. I decided to knit both strands held together to make up the thickness.

Cotton costs an arm and a leg! But no matter, I pressed on.

And then, I knitted all the way up to the shoulders and found I'd miscalculated. My colour change was located at least an inch too high. It looked ridiculous, like a baby's bib. But I didn't want to frog it, so I carefully detached the top part from the bottom part, added a stripe, knitted up another inch of orange, and then painstakingly grafted the two halves back together. I can now say that I have taught myself how to graft ribbing. It was horrible. The only instructions I could find on the internet made no sense, and it was only by squinting very hard and exercising my full (but limited) mental capacity for rotational symmetry that I managed to figure out which way the yarn should be threaded when the knit stitches changed to purl. I'm thinking that organic chemistry majors would have a significant advantage over me in kitchener stitching.

Here's a picture of my grafting-in-process. 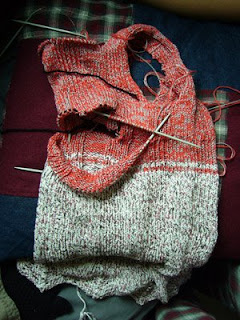 I should write up some better instructions myself.

And then I got up to the shoulders, grafted those together, and then I decided I wanted short sleeves. I'd been reading about knitting sleeves top-down in the round, by picking up stitches around the armhole, and using short rows to form the cap. I decided to give that a try. The hard part was trying to figure out to vary the steepness of the the short rows correctly, which meant trying to imagine what the sleeve would look like if it were spread out flat.

And finally it was done. 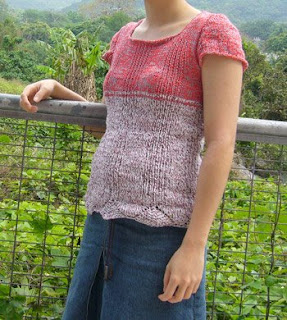 Of course, the minute it was done I dropped a spare rib with barbecue sauce on it and then got crapped on by parrots, so it's going straight into the laundry. Sigh.

I am definitely going to try to write this pattern up and sell it on Ravelry, even though working out the size conversions is going to be a nightmare. I'd be happy if I made back the cost of my yarn.
Posted by Kea at 2:52 AM

broadcasting from a knitting parlour said...

I love your blog! You are a riot!

Met you on Ravelry in Designers something or other.