My husband has the tolerance of a militant five year old for all things green. It's not that he's a huge meat-eater either. He is just very particular and can happily get by on a sandwich or a bowl of cereal for dinner. Unfortunately, I can't do that, so I've been spending much time and energy trying to come up with new ways to make green foods enticing for him. I draw the line at pureeing food for him. He is not a baby.

We have had some successes. For green beans, that has meant copious amounts of garlic or bacon in a quick saute. Since we cannot live on garlic green beans alone though, I have tried other vegetables too. Turnips are out. As are parsnips. No cabbage. He cannot stand the smell of cooking brussels sprouts or cauliflower. He pretends that Shanghai bok choi and broccoli rabe don't exist when they appear on his plate. Peas are the devil's spawn. Celery is tolerated as long as it is minced into oblivion.

A few weeks ago I picked up a beautiful multi-colored bunch of swiss chard at the farmer's market up the street. When I came home, I showed the DH the pretty bouquet, hoping that the rainbow colors and innocuous-looking green leaves would pass muster. Below are pictures of the dishes I came up with that even my picky DH managed to polish off.

First, I promised to chop everything up SMALL and toss with a sausage over pasta. (I have discovered that pork is my friend in my quest to make vegetables palatable.) That went over quite well, and to my relief there were few "green bit" casualties at the end of the meal. 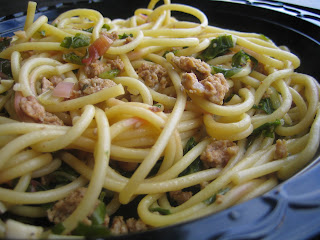 As there was a LOT of chard, I had to figure out another way to use them. Ironically, that was even harder as I discovered that I did not like chard very much either. 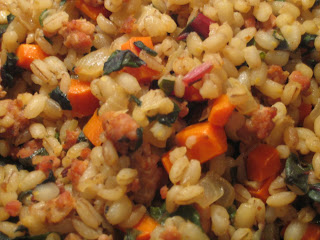 It's been freezing cold here and as we'd been making a lot of barley-based soups, we had some barley on hand. Instead of putting the chard in a soup though, I came up with this barley, sausage, onion and carrot dish that was actually very quick to prepare. Start boiling water for the barley and let the barley simmer away while chopping and sauteing the other ingredients. By the time that's done, the barley is ready to be tossed with the rest, making a very warm, satisfying meal in itself. I used this to stuff some roasted red peppers, which made for a pretty presentation, but taste-wise wasn't really worth the effort.

Even I didn't mind the chard in this dish.

Lastly, I used all the rest of my chard in another recipe from 101cookbooks, the Chickpea Hot Pot. I had a giant cauliflower hanging out in my window sill, and a carton of brown rice left over from a meal at P.F. Chang's, so I threw everything into a pot and had a lovely soup for three meals. I have to say though, that after 8 meals featuring it, I was glad to see the last of my bouquet of chard!

Never heard of chard before? Is it a spinach?